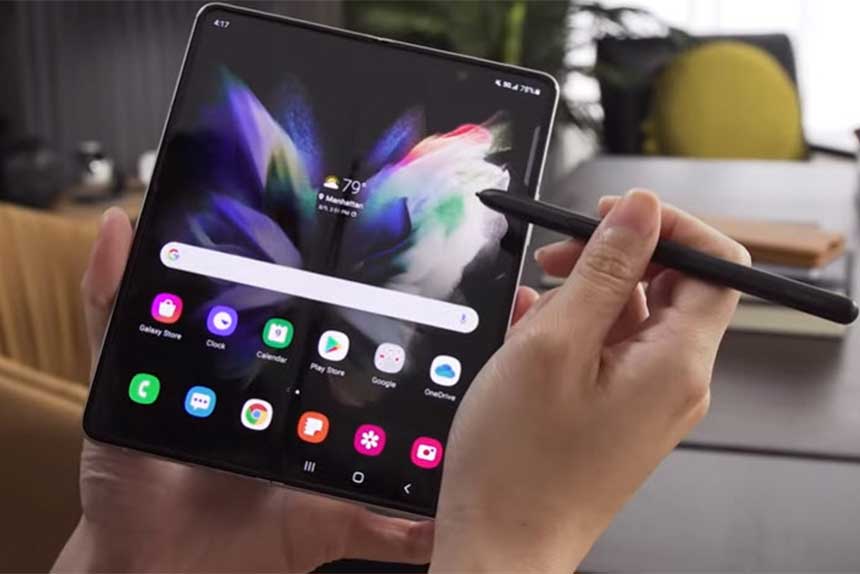 We had the opportunity to try out the freshly announced Samsung Galaxy Z Fold 3 and share our first impressions with you through this hands-on. Does it have what it takes to make you forget the Note range?

The Galaxy Z Fold 3 has been made official and, unsurprisingly, Samsung has packed it with technology to make it its technological showcase. This range of folding smartphones carries the vision of the South Korean brand for the next few years.

However, Samsung had already fine-tuned its recipe for folding smartphones in 2020. So, a year later, the Galaxy Z Fold 3 builds on a good foundation and can focus a bit more on other improvements.

The Samsung Galaxy Z Fold 3 is a continuation of the previous model. The sharp format of the Galaxy Z Fold 2 is therefore largely reused and even if the new model is a little thinner, it is especially in terms of weight that we will feel a difference.

With 271 grams on the scale, it is 11 grams lighter than the previous generation. That’s not enough to make you forget that it weighs a lot in the palm of your hand, but it’s quite appreciable and it bodes well for the years to come.

Now, here, aesthetically, the differences are few and far between – I omit for the moment voluntarily the fact that the internal screen camouflages a photo sensor instead of composing with a punch, we’ll come back to that later. So I’d like to draw your attention to the Galaxy Z Fold 3’s durability improvements.

The waterproofing provided by the IPX8 certification and the Gorilla Glass Victus on the front and back of the phone are real pluses, but what I really appreciated was the pleasantly sturdy feel of the aluminum that makes up the Galaxy Z Fold 3’s hinge and frame. Whether it’s the neat touch under the fingers or the vigorous clap emitted by the smartphone when you close it, there is something reassuring about this product.

Beyond that, Samsung claims to have reinforced the plastic layer covering the large inner screen – the one that folds – by 80% compared to the previous generation. Listening only to my courage and ignoring the consequences, I firmly planted the short nail of my thumb in the slab to see if it left an impact.

No way! The experience repeated a little later with the tip of the S Pen designed for this purpose will not leave any damage either. In other words, everything suggests that the wealthy user of a Galaxy Z Fold 3 will not be on the verge of apoplexy at the slightest fall. The technology showcase is becoming more and more of a finished product.

The intrinsic characteristics of the two AMOLED screens of the Galaxy Z Fold 3 do not really change compared to last year’s model. The external panel preserves a diagonal of 6.2 inches and HD+ definition. If you found it too narrow on the Fold 2, this will most likely also be the case on its successor, despite a subtle change in ratio (24.5:9 instead of 25:9). Even the bubble for the photo sensor remains in the same place, centered. We will especially remember the switch to an adaptive 120 Hz refresh rate for a better fluidity.

The trained eye will notice quite quickly that a small circle of pixels stands out from the rest of the display area. This is where the internal camera hides, blowing hot and cold. The sensor is never perfectly camouflaged, the illusion is never perfect and therefore the screen is never uninterrupted as Samsung claims.

However, if we stop trying to nitpick and let ourselves be carried away by the YouTube video we’re watching, the Netflix series in front of us or the colorful photos we’re scrolling through in the gallery, this little area in the screen knows how to make itself forgotten.

I really insist on the small size of the area that hides the photo sensor. Even when you see it really well – displaying a white background – it remains more discreet than a punch and especially than a notch. On a smartphone folding in 2021, it is very appreciable, but Samsung has interest in gradually improving this integration.

This is much more convincing than on the ZTE Axon 20 5G that we had tried, but could suffer from the comparison with the latest technology of the same kind of Oppo.

Moreover, Samsung decided to insert here a 4 megapixel sensor. A low definition that is felt in particular in the quality of selfies, quickly challenged during my grip. Is it really serious? No. This camera, which is difficult to reproduce details as it should be, will be used mainly for video conferences where your interlocutors will probably not care.

For beautiful photos, you can turn to the external front sensor and the triple back module.

The better immersion provided by the internal screen is interesting for entertainment, but it is also intended to serve the productivity of users. Viewing content and working on a larger display area is obviously a comfort.

Productivity was the main argument of Samsung’s Note range. A range that is not entitled to any new model in 2021 and that sees its signature accessory, the S Pen, become compatible with the Galaxy Z Fold 3.

During my hands-on, I could not discover the S Pen Pro. The latter is equipped with a button that allows you to change the lead with a special tip for the Galaxy Z Fold 3 and another for the Galaxy Note, the Galaxy S21 Ultra and compatible Galaxy Tab. It also arms itself with Bluetooth functions.

However, I was able to play with the S Pen Fold Edition, which works exclusively with the new folding smartphone – its lead does not change and therefore works only on the plastic layer of the large screen. It feels the same, the same comfort of writing in the hand with a good responsiveness to the level of pressure applied. This version of the stylus does not have Bluetooth functions.

For note taking and photo editing, the S Pen brings a welcome added value thanks to the precise gestures it allows. One major drawback: the Galaxy Z Fold has no drawer to store the stylus. To do so, you have to buy a well-designed but bulky special case. Samsung can still improve on this point, especially if it intends to make people forget about the Note range.

However, the South Korean brand is pleasing with its software optimizations. The screen partition in three simultaneous applications is still nice, but the interesting little option this year is the side task bar that you can pin to easily switch from one app to another.

Speaking of apps, Google, Microsoft platforms have adapted the way they display their content to the Galaxy Z Fold 3’s large screen. The same goes for Instagram. For the latter, the photo feed is indeed more appreciable in this way, but the stories in 16:9 or 18;9 are cropped unfortunately.

On Netflix, if the black bands at the top and bottom annoy you, you can make the screen occupy the entire surface, but you will not enjoy the frame chosen by the director of the series or movie.

The rest of Features

Besides, the Galaxy Z Fold 3 is a premium smartphone. Its Snapdragon 888 ensures a lot of power, especially since it is coupled with 12 GB of RAM. The 5G is there as well as the stereo speakers.

Of course, I haven’t been able to test the 4400 mAh battery yet, nor to get a real idea about the three 12-megapixel sensors on the back or the 10-megapixel one on the front. I’ll see you in the full test for more feedback on these topics.

The margin of progress between the first and second generation of this Fold family was obvious. On the other hand, the evolution represented by the Galaxy Z Fold 3 is more subtle, but still enticing.

The device is finally waterproof and more resistant to the ravages of life, it lays the groundwork for proper integration of the camera behind the screen and welcomes the S Pen. It takes on an ambitious dual role, being both a somewhat futuristic smartphone and a product that meets the demanding needs of its target audience.

The Galaxy Z Fold 3 still needs to mature to really make people forget about the Note range, especially by finding a more practical solution for storing the stylus. The road is still long, but Samsung is moving fast. All this, while lowering the selling price.

The Samsung Galaxy Z Fold 3 is priced at 1799 (256GB) and 1899 dollars. This is still very expensive, but the brand is making a noticeable effort compared to the more than 2000 dollars claimed last year for a Fold 2.

Previous
iPhone 12 tips and tricks: 14 interesting things for iOS 14 to try
Next
Samsung Good Lock: How to customize your Galaxy smartphone